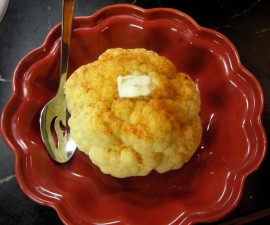 Choose those that are close and white, and of a middle size, trim off the outside leaves, cut off the stalk flat at the bottom, let them lie in salt and water an hour before you boil them.  Put them in boiling water with a handful of salt in it, skim it well, and let it boil slowly till done, which a small one will be in fifteen minutes, a large one in twenty, and take it up the moment it is enough; a few minutes longer boiling will spoil it.

Leni says – This is a recipe that makes clear that for the most part good cooks of the late 18th and early 19th centuries did not cook vegetables to death as seems to have become the style later in the 19th century.

Randolph requires a soaking in salt water for the whole cauliflowers as she is going to serve the heads whole.  She wanted to be very sure there were no cabbage worms lurking in the creases of the florets.  Even today that is a good idea especially for homegrown cauliflower (and broccoli too).

When it is ‘enough’ as she so simply phrases it the whole cauliflower is drained well in a colander being careful to keep the whole head together and served hot.  She does not list seasonings but I suggest the following possibilities;

This late winter I was able to buy cauliflower for $1 a head so I took advantage of the deal, bought 10, and put them in the freezer for later use.